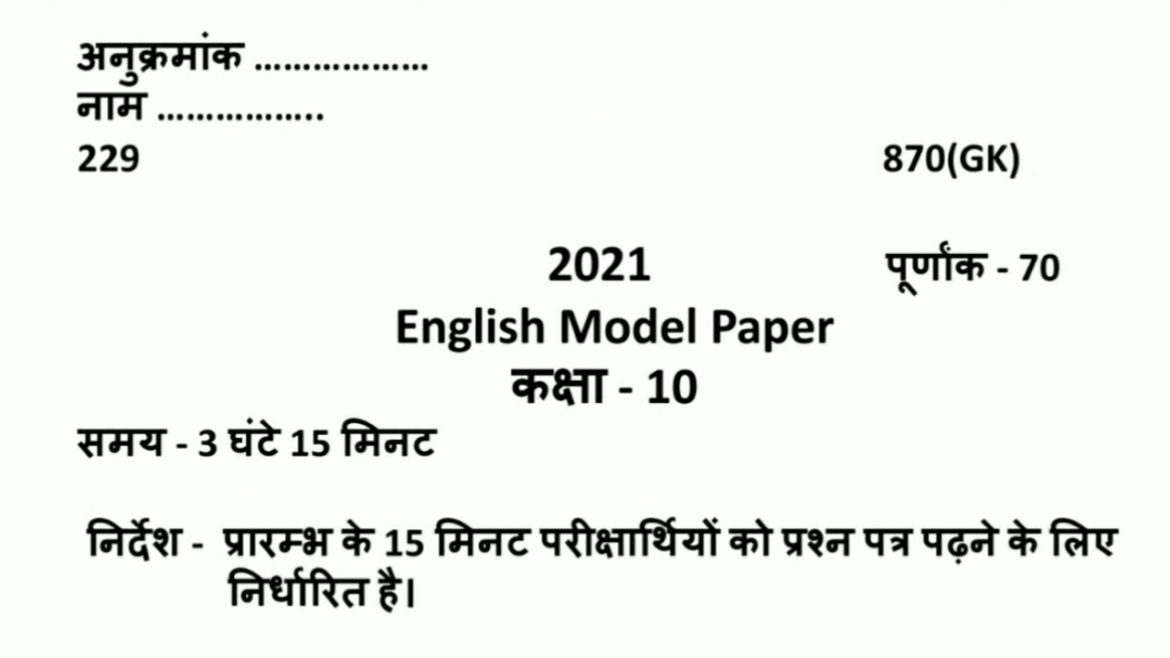 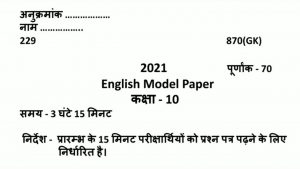 Instructions :
(i) This question paper is divided into Sections – A and B.
(ii) All questions from the two sections are compulsory.
(iii) Marks are indicated against each question.
(iv) Read the questions very carefully before you starting answering them.

1. Read the following passage and answer the questions given below it :
But although many people loved the old man and delighted in his wisdom, there were some who did not approve of him. He taught that man’s own mind influenced his conduct more than the gods. This seemed to some people a new and wicked idea. He said that there were higher and nobler deeds than making sacrifices to Athens and the other gods of Greece, and many people thought that he was leading the young astray, questioning all that they had been taught to believe and filling their minds with doubts.

(i) Write the name of the lesson from which the above passage has been taken. Who is the author of this lesson? 2

(ii) What did Socrates teach the people of Athens? 2

2. Answer any one of the following questions in about 60 words : 4

(a) Who was Yaksha? What questions did he ask Yudhishthira?

(b) What is the significance of the Ganga for Nehru and for India?

(a) Who was Lencho? What were his main problems?

(b) What according to Yudhishthira is the greatest wonder in the World?

(c) What did the jailer say to Socrates before giving him a cup of poison?

Install Our Mobile App for Board Exam Preparation – https://play.google.com/store/apps/details?id=com.knowledgebeem.online

5. Read the following piece of poetry and answer the questions given below it :

Not enjoyment, and not sorrow,
Is our destined end or way,
But to act that each tomorrow
Find us farther than today.

(a) What does the poet say in the first two lines of the stanza? 2

(b) How should we act in life? What is the meaning of the words ‘finds us farther’? 2

6. Give the central idea of any one of the following poems : 3

(i) The Fountain (ii) The Village Song

(i) How did Edison serve his country during the First World War?

(ii) What did the village boys find in the pasture?

(iii) How and why did the judgement seat of Vikramaditya disappear from the earth for ever?

(i) Edison promised his mother to give her a dollar every night from what he earned.

(ii) Thomas Alva Edison was a great inventor of England.

(iv) Delhi was the capital of king Vikramaditya.

(b) Edison was taken out of school because …
(i) the teacher asked his parents to withdraw him
(ii) he was not pleased with his teacher
(iii) he was dull student. (iv) he did not like school education

10. Do as indicated against each of the following statements :

(b) He gave me a glass of water? (Change into Passive Voice) 2

(c) The teacher said to the Principal, “Please, grant me leave for two days only.” (Change into indirect speech) 2

Our Mobile App for Objective Types Questions Preparation for Board Exam and Competitive Exam https://play.google.com/store/apps/details?id=com.competitive.onlinequiz

11. (a) Choose the correct preposition from the ones given below the sentence to fill in the blank : 2

(b) Complete the following sentence : 2

(d) Punctuate the following using capital letters wherever necessary : 2
do you know that lucknow the capital of uttar pradesh is a historical city

14. Write a composition on any one of the following topics in about 60 words. Points are given below for each topic to develop the composition : 6
My Father
(i) Introduction
(ii) His dress and behaviour
(iii) His qualities
(iv) Daily life
(v) Conclusion

15. Read the following passage carefully and answer the questions sets thereon :
A man was kept in jail without any fault. When the king visited the jail, he told him that he was innocent. The king found out that this was true. He gave him a sum of money and set him free. He went straight to the market, where some birds were kept for sale. He purchased all the birds from the shopkeeper and set them free. At this the shopkeeper was surprised. Then the man said, “If you had been in prison like me for no fault, you would have done the same.”

(i) What did the king do when he found out the prisoner innocent? 3

(ii) What did the man say to the shopkeeper? 3